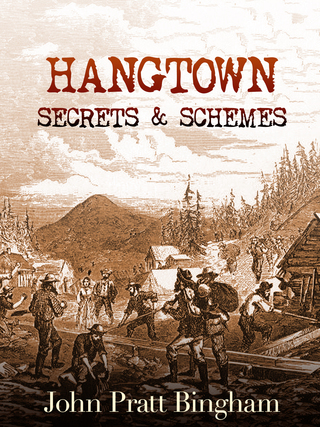 Hangtown: Secrets & Schemes is now available in paperback or ebook formats. This is book two in the Hangtown Series.

All of my books are available through me. If you'd like an autographed copy, just let me know.

Available from online book sellers as an ebook and as a paperback.

Book Cover
TO PURCHASE AN EBOOK OF GOD AND DREAMS, CLICK HERE
The above link with take you to a list of bookstores

Each may also be purchased from http://www.amazon.com.
Look up by title or John Pratt Bingham

Use the above link to receive information about giveaways, new releases, etc. Free handouts come with signing up.

This link will take you to a bookstore of your choice.

To Purchase GOD AND DREAMS: IS THERE A CONNECTION?

Purchase God and Dreams: Is There a Connection? Here

This will take you directly to publisher's website. Look under Dove Books for 172.

The story of Zach Johnson's search for his soul continues. Zach struggles with issues of morals, religion, sex, and love. The adventure is set in the 1852 mining camp that today is Placerville, California.

Hangtown. The year is 1851 and the place is Hangtown, the California mining camp that today is known as Placerville. It was here that the unpredictable and entertaining story of Zach Johnson's search for gold takes place. Zach, the son of an Episcopal priest, was a gentle man who'd come to Hangtown from Virginia to get rich. What did he do that so many men wanted him dead?

Hangtown is an action-packed adventure of personal growth that combines history, intrigue, and romance to create a gripping tale. Hangtown is intended for mature readers. The story contains sexual content and moderate language.

Inner Treasure will appeal to people who want to deepen their relationship with God, with others and with their own selves. Inner Treasure provides a method for coming to grips with the essentials of the Gospel's proclamation, with the truth of our nature and with our response to God's message.

THE KINGDOM AS YEAST

This is another of the parables he told them: "The kingdom of Heaven is like yeast, taken by a woman and put into three measures of flour until the whole lot has risen." (Matthew 13:33)

This is another teaching about the growth-producing nature of the Kingdom. Jesus likens the Kingdom of Heaven to yeast, that which causes dough to rise. Yeast is a living organism. It functions as a catalyst in the fermentation process, which is what makes the dough light, causing it to rise. When something ferments, it "excites into action."

Jesus chose yeast as an image for the Kingdom not only because it causes growth, but because it is a living, natural catalyst. Which is to say, the Kingdom is not some quiet, dormant, ethereal place one hopes to be good enough to enter after death, but it is a living, active ingredient in our current lives, one which excites our psyche into action in order that we might achieve wholeness. As a catalyst it generates the growth, causes the inner transformation to happen.

Crucial to this process also is the role of the woman. It is her task to knead the dough in order to mix the ingredients. Whenever there is pain in your life, imagine yourself being the dough which the hands of the woman is kneading, spreading the yeast (Kingdom) throughout your person. It sometimes takes a painful, disruptive trauma in our lives to break up our old patterns, turning them inside out, before a new perspective can be achieved. Many experience this kind of trauma in divorce. Such a trauma can be the dough out of which a conversion arises.

God and Dreams: Is There A Connection?

"I am pleased to report that John Bingham is one of these rare teachers of dreaming. His book is historically grounded, theologically ambitious, and clinically valuable. It gathers in one volume the insights of someone who knows what he knows not only from extensive research but also from deep self-reflection and personal experience. For those who care called in their dreams to seek a deeper understanding of themselves, the world, and the divine, John Bingham has something to teach you."

There is a Spirit who is awake in our sleep and creates the wonder of dreams.
He is the Spirit of Light, who in truth is called the Immortal.
All the worlds rest on that Spirit and beyond him no one can go.
- Upanishads (Ninth Century, B.C.E.)

The belief that dreams come from God is not limited to the Middle East and Europe. It is not exclusive to Judaism, Christianity, and Islam. People throughout the world, with their own faith traditions, share the belief that dreams are a communication between the spiritual realm and individuals. It is such a strongly held belief that many of these people structure their communal lives so that they can take advantage of the guidance and healing their dreams provide. The survey that follows is a sampling of these other religious perspectives.

William Howells, a Christian missionary among the Dyak people of Borneo at the beginning of the twentieth century, wrote:
"The Dyak revelation is communicated by means of dreams or visions, they therefore consider dreams as oracles from the gods; they read their dreams and pretend to understand them as we do the Holy Writ. In all their pursuits they are guided by their dreams."

Mandaza Kandemwa, a Bantu healer of both the Shona and Ndebele peoples of Zimbabwe, reported that each day in Bulawayo, Zimbabwe's second largest city, starts with people gathering to share their dreams. Dreams for the Shona and the Ndebele are a channel between the living and the world of the invisibles.

Among other African tribes who value dreams are the Ashanti of Ghana; the Bambara of Mali; the Dogon of Sudan; the Konde and Nyakyusa of Tanzania; the Northern Yaka of Zaire; the Rif of Morocco; the Tiv of Nigeria; and the Zulu of South Africa.

In the Hindu Vedic writings from 1500-1000 B.C.E., dreaming is understood to be an intermediate state between this world and another. While asleep, the soul can leave the body to experience both realms.

In the Himalayas the Chamar and the Lepcha pay attention to their dreams.

The Lepcha live in the thick forests of southwestern Bhutan, a small country between India and Tibet. On a daily basis it is important for the Lepcha to be in rapport with the spiritual forces that are in nature. While shamans are the community's principal source for contact with spiritual forces, the Lepcha regard dreams as a visual manifestation of the mystical universe that surrounds them.

"There is widespread belief [among the Lepcha] that while dreaming the soul can detach from the body and wander from village to village in the empirical reality of night, or by going through the appropriate gates, can travel to the underworld, generally thought to be inhabited b the deceased. In the underworld, as well as on the earth's surface, the individual may meet, communicate with and have visions of, the spirits of the deceased, deities and demons. However, while normal people's dreams are often not remembered or are confused and difficult to interpret, shamans' dreams are of entirely different nature.

It seems,in fact, that shamans are somehow able to control their own oneiric activity, weaving a kind of logical thread from one dream to another. So shamans often think in terms of an oneiric continuum, causing them to live double lives."

Long ago in China, the Miao believe, their people could meet with spirits and talk with them. When the physical world and the spiritual world separated, a new way of communicating with the spirits became necessary. Ancestors become mediators and sent dreams to communicate with the living.

The members of the Kol tribe in central India also are sensitive to the separation between the physical and spiritual realms. Dr. Sarvananda Bluestone has researched their dream experience.

"[There is] a very thin and fragile thread [that] connects the dreamer with his waking soul. A kind of bio-spiritual telephone wire, this thread allows the soul to remain in constant contact with the dreamer, no matter how far it wanders. If, on its nightly journey, the soul is attacked by an evil spirit, the ensuing struggle is communicated to the sleeper through this thread. Nightmares are this communication of the soul's struggle at some distant place. The sleeper shouts or groans or thrashes about, depending on the severity of the attack upon the soul. At such times the sleeper should be gently wakened to force the soul to return to the body and out of harm's way."

The chapter continues with references to Canada and Central and South America, Native American traditions, those of the Pacific Region and a concluding summary.